I have had the smell of barf in my nose hairs for the past two and a half weeks. Every single member of this family (including myself) has puked on me, and I have washed all the linens and the floors of this house 58 times now (insert the sound of wailing here).

You think I sound whiny? Me too. Once I get this smell off of me I should (although I’m not promising anything) calm down. I’ve just never been around SO MUCH throw up. Even Frank keeps asking us all if we’re going to “frow up” (he then proceeds to make the retching movement and sounds).

I can’t decide which of the littles was worse.

1: Bob projectile vomiting Greek yogurt like a sprinkler as he walked around the KITCHEN.

2: Frank crawling into my bed at roughly 2am saying, “mommy, Fwankie tummy hurts” and then proceeding to puke into my face (he had olives for dinner, FYI).

You be the judge. 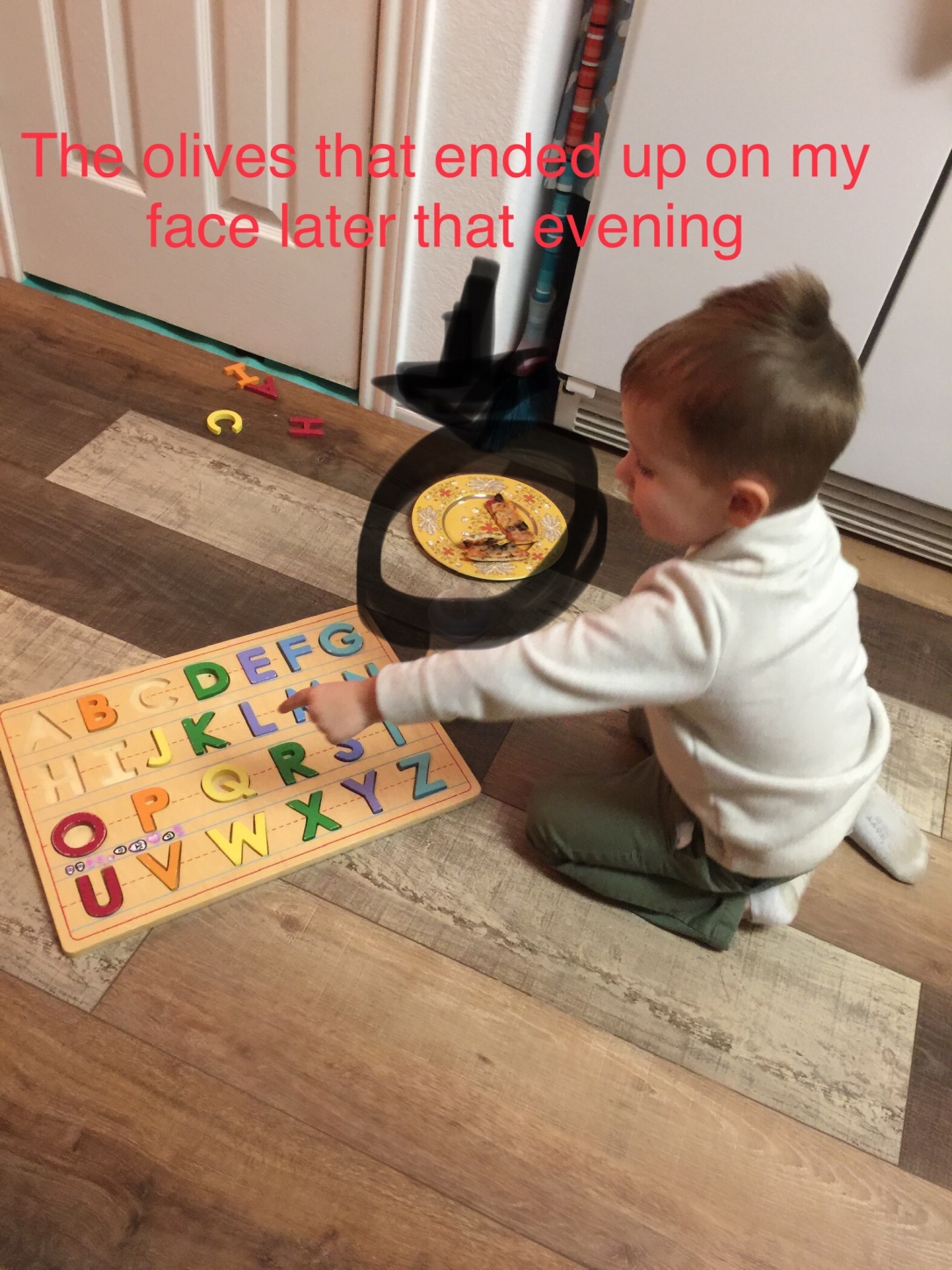 So now you’re caught up on my life these past two weeks. All the vomit.

Does anyone else feel like they’re treading water? Because I certainly do. And I’m not even treading water in proper form. I’m talking flailing arms, gasping for breath treading water. Like, I may sink at any moment.

Don’t get me wrong, things aren’t terrible by ANY means. They’re just messy and smelly and why am I always 13 minutes late EVERYWHERE I go?! Maybe because of this: 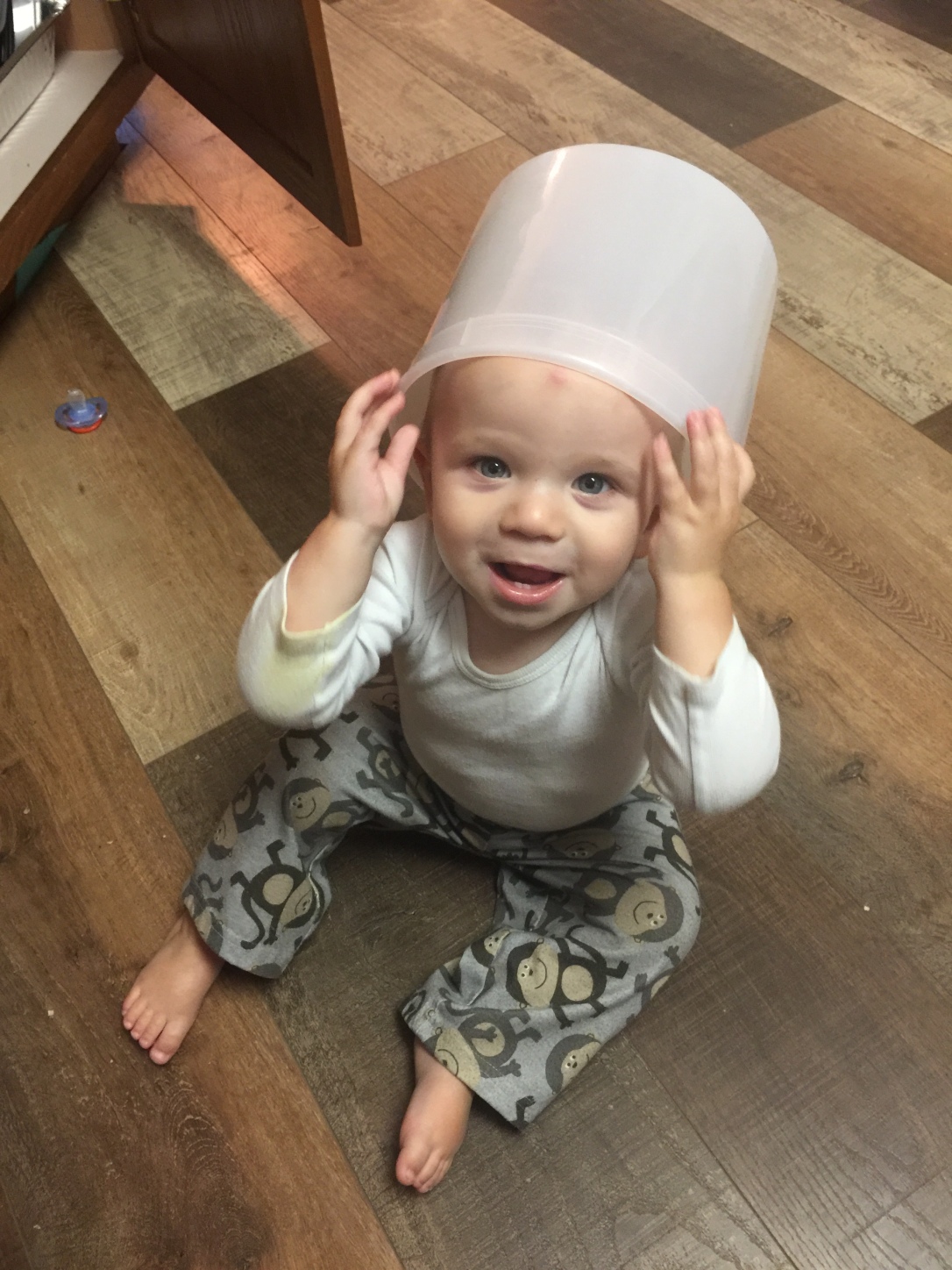 Isn’t he the cutest little thing?! He’s been carrying that bucket around the house for days, wearing it like a hat. And see that red bump on his noggin? That’s because the child is a bulldozer and falls or walks headfirst into something every 3 minutes. 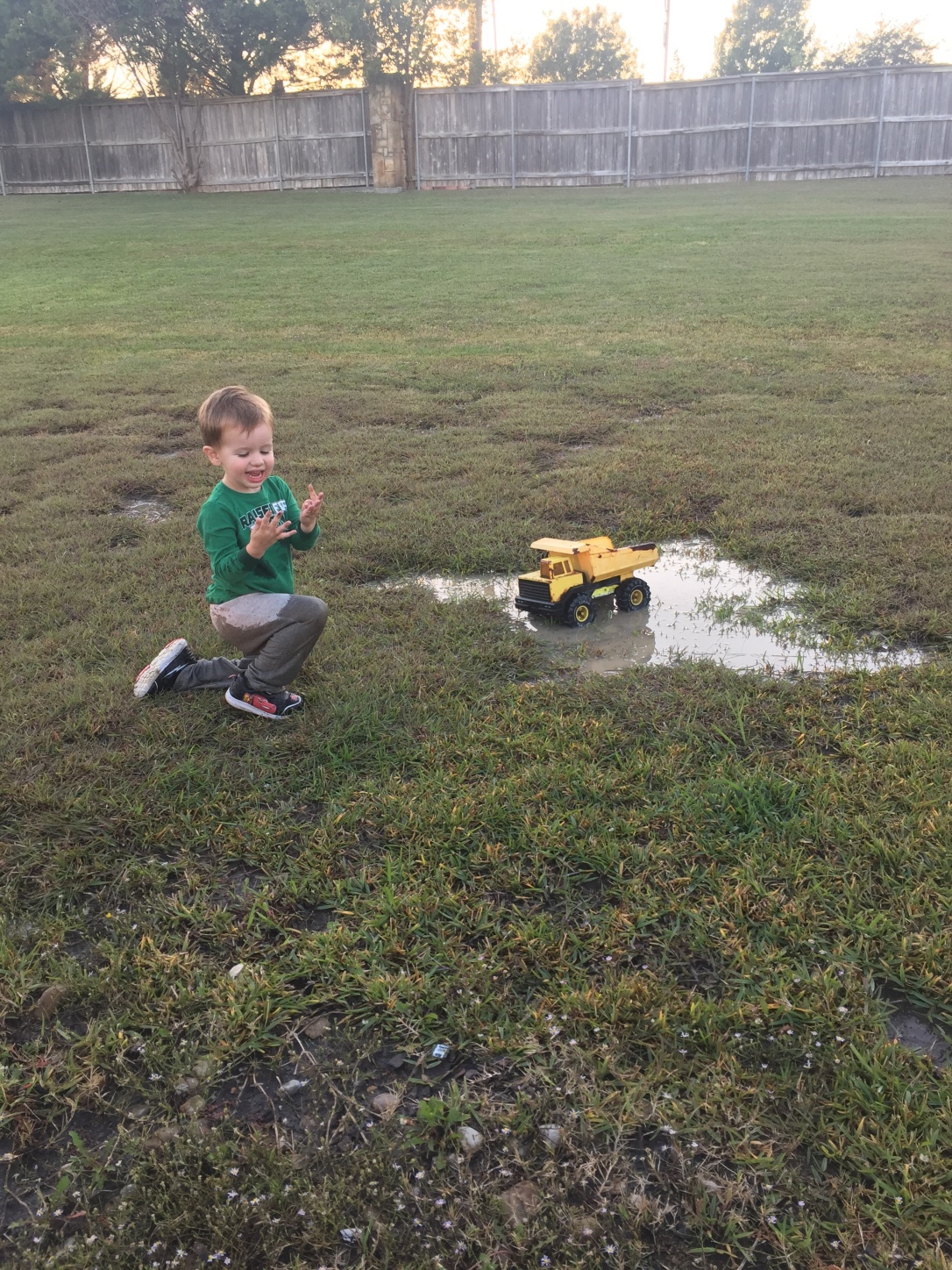 Far be it for me to complain about rain, but TEXAS. The rain would. not. stop. And Frank is so obsessed with jumping in every puddle he can possibly find. And…. I just give up. He was flopping around the yard like a fish out of water at one point and that’s when I decided I will henceforth stop trying to keep him clean. Forever and ever, amen. 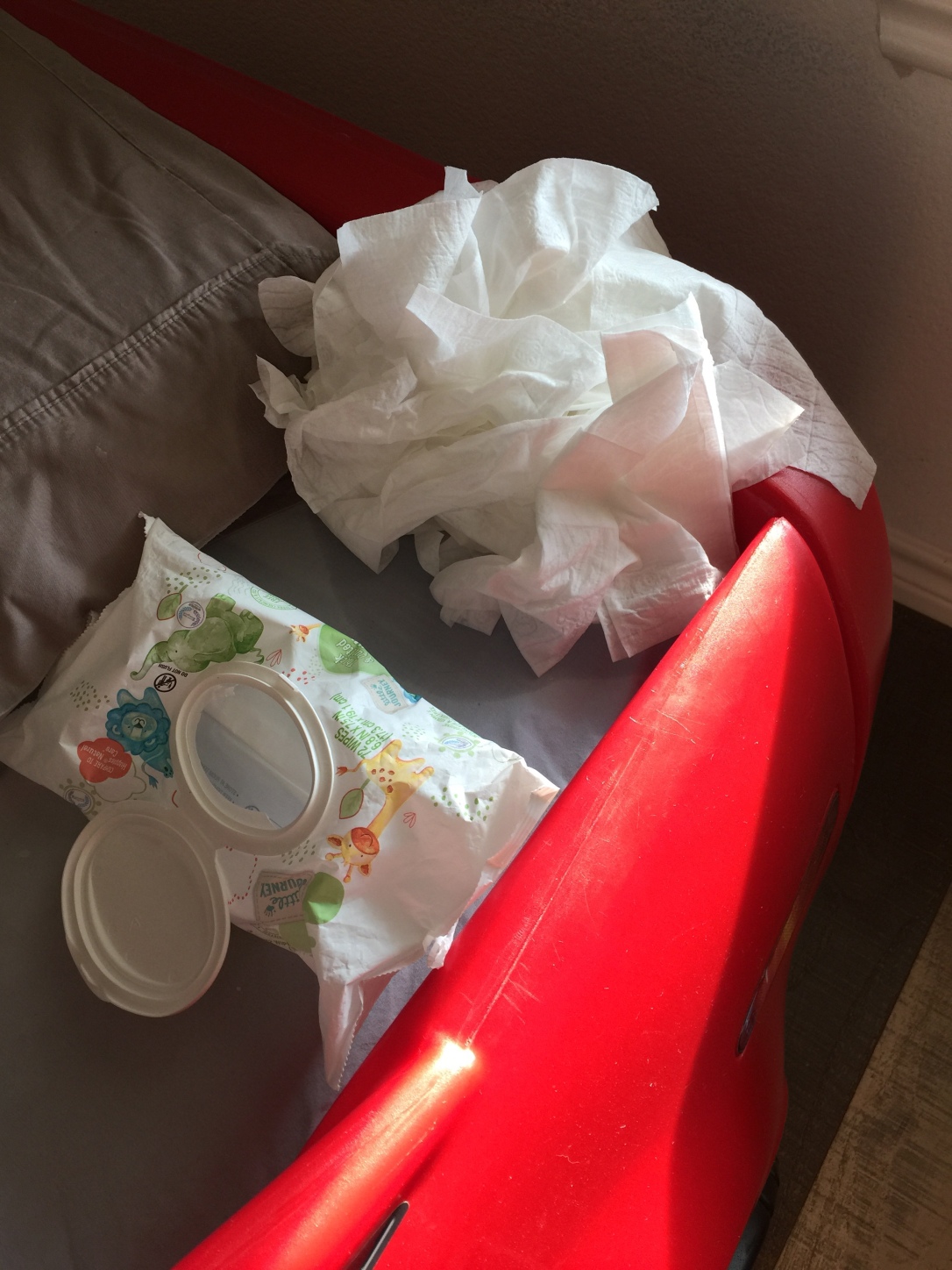 Why? Why would you even do this? 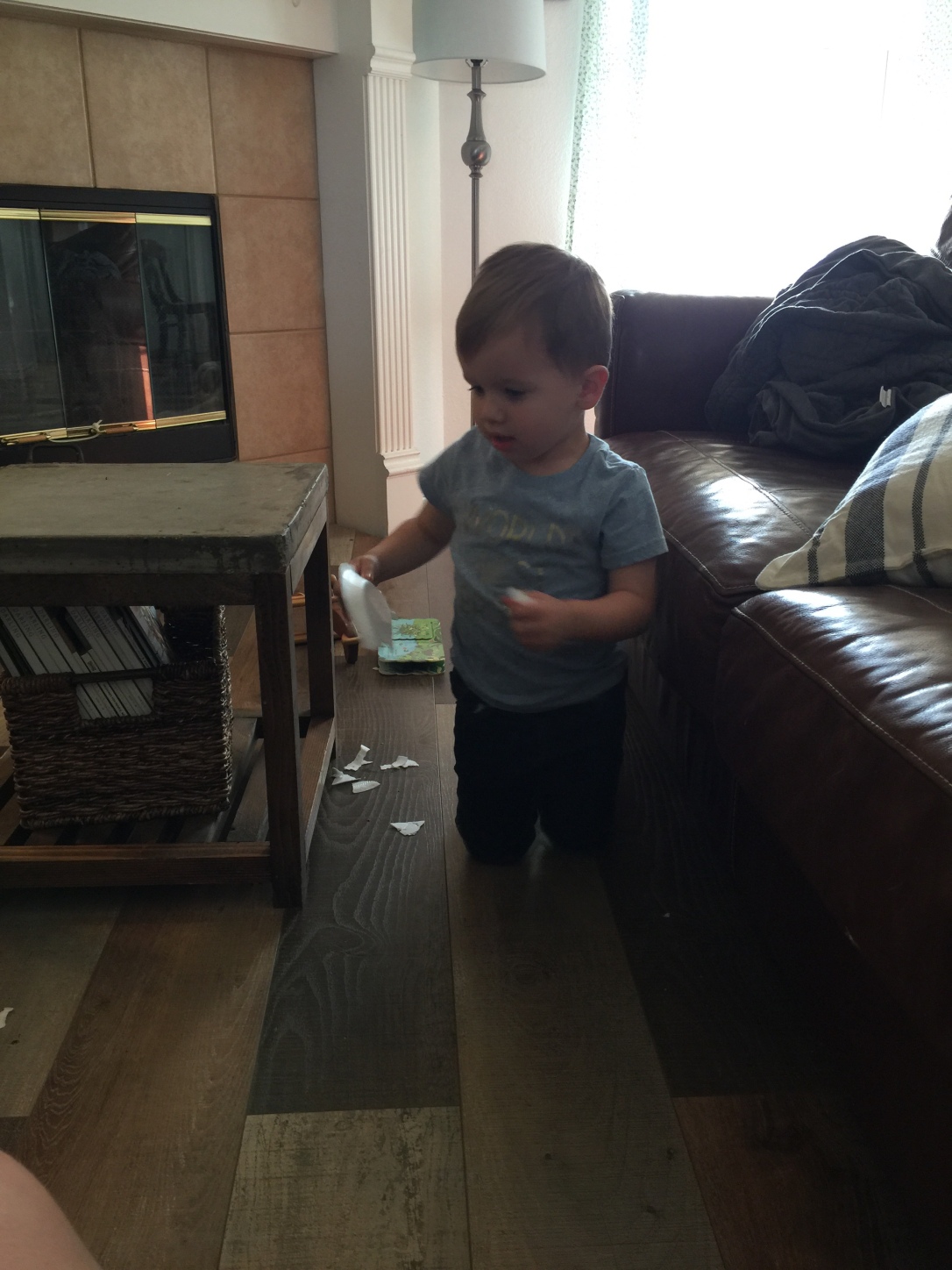 Frank was tearing things apart (reference the above “wipes” incident) and as he was full on throwing trash around like confetti he looked at me and with a sly, defiant smile said, “Mommy. C’ean it up.” Like, it was an order. Oh, no son. You messed with the wrong woman. Not ONLY did I not help him clean it up, I sat on the couch with a glass of wine and watched HIM clean, while taking this picture.

Only God can judge me. 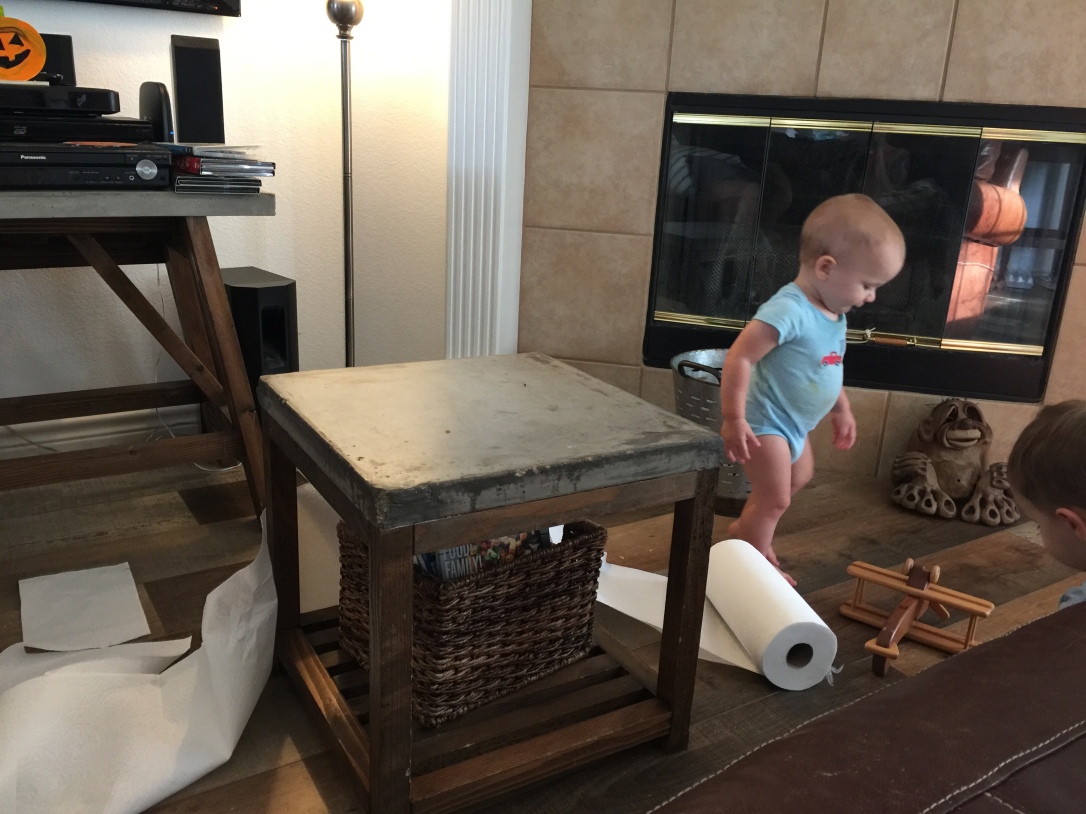 Sidenote: Can we also talk about how Bob looks like a tiny Sasquatch in this picture? That’s the same (and only) pose that Bigfoot is in! Tee hee….

But then this picture happened and it was the best moment ever. LOOK AT HIM!!! 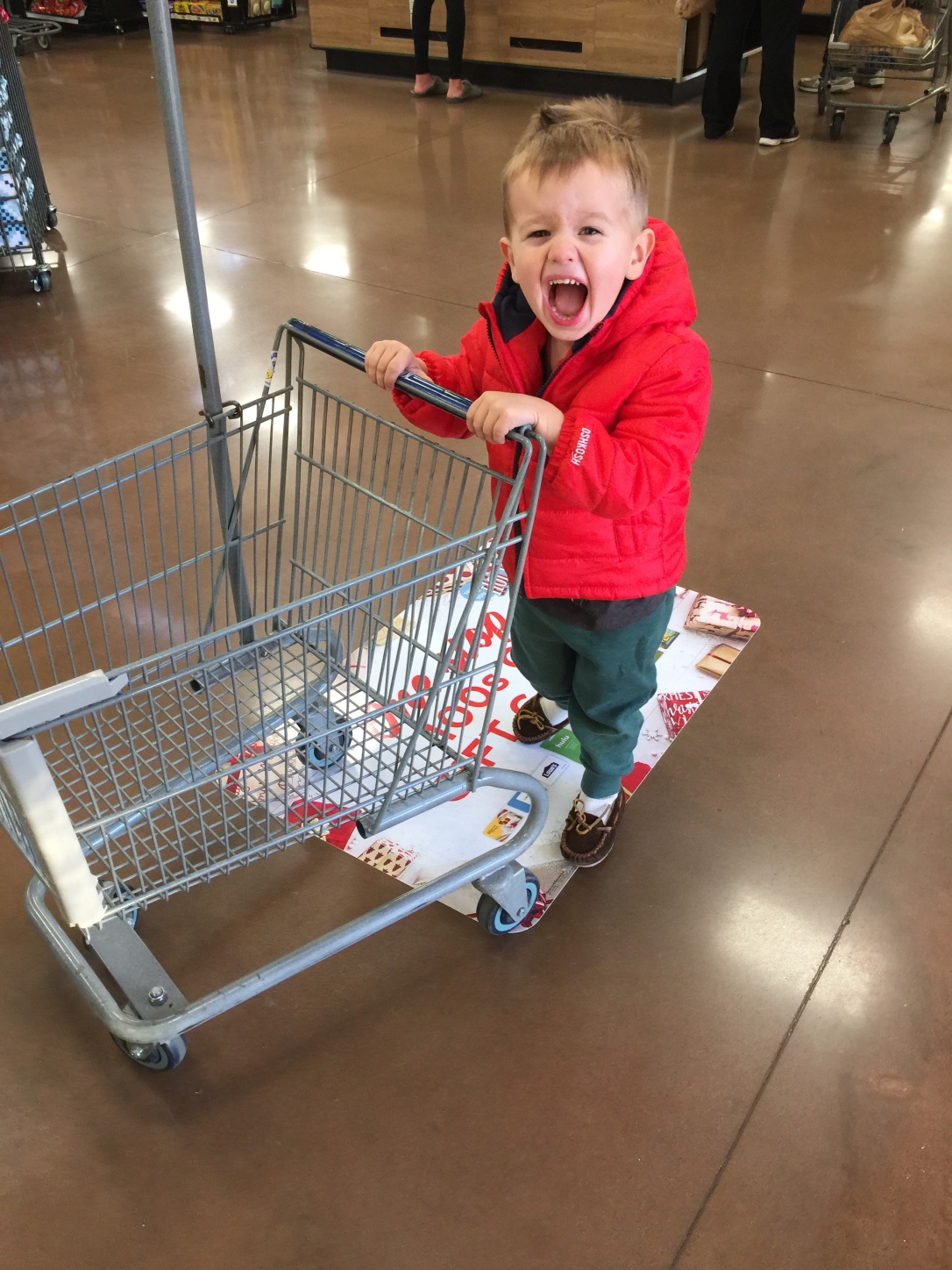 All of his clothes and shoes were muddy from the incessant RAIN so I threw on his little moccasin house shoes, his winter coat from last year, and his disheveled hair just really topped it all off. He was a hot little mess, but when I gave him that baby cart, he was so utterly excited that I was straight up crying, I was laughing so hard. He acted as if I had just given him a new monster truck. He was beside himself, as you can see.

Did he look like a toddler Anthropologie model? Heck no. Was he basically wearing pajamas to the grocery store? You bet your sweet self he was. And did I care? You better believe I didn’t.

We had so much fun going through the store and putting all our groceries in that tiny cart. He said, “exoose me” and “fank you!” and “peeeese” and “mommy! we get dis!” and he had better manners than 100% of the adults in Kroger that evening. Also? Not one person told me how cute he was.

We’re a messy bunch (no one even knows why I’m referring to myself in the third person plural here) who are truly just treading water most days with 1 and 3 year old boys who have more energy than the Earth. So the picture of Frank with the cart is really my life in a nutshell: thrown together with crazy bedhead, but screaming and smiling with the excitement of whatever surprises life is throwing.

Also…. This doesn’t really have anything to do with anything, but I just need to know if anyone else has to move tiny trash cans every time they take a shower. 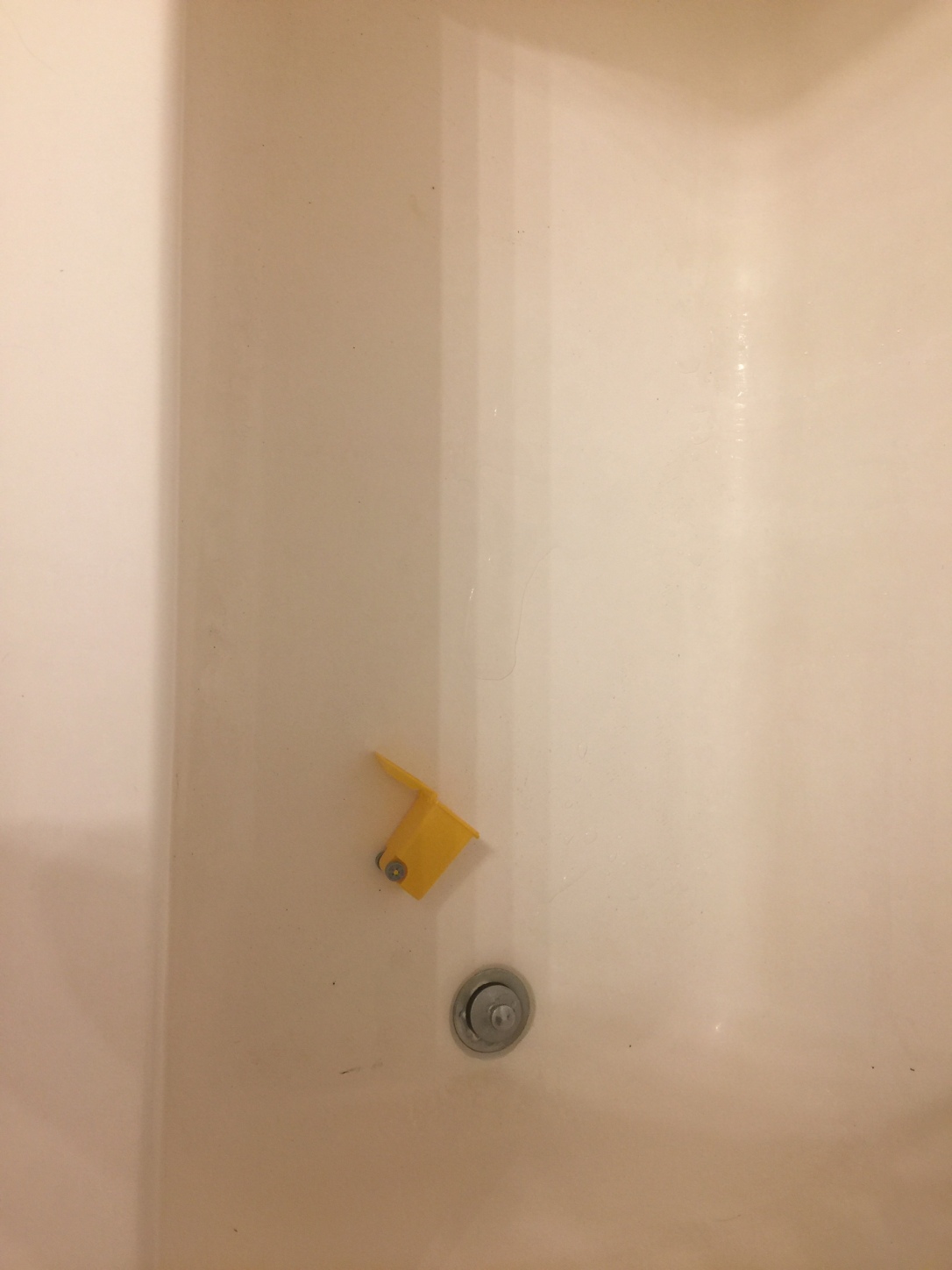 Chip discovered some loose tiles in our shower about 2 months ago and tore apart the wall so as  to prevent mold, so we’ve been using the boys’ bathroom. (No comment on the fact that our shower is STILL torn apart, with no end in sight… ehem. And don’t worry, I’m not throwing my groom under the bus, he gave me the green light to write this. He also told me, “When I say I’m going to do something, there’s no need to remind me every six months about it”).

Lest you think I’m a TOTAL trainwreck, it is worth mentioning that I ran in a 5K this past Saturday. After I wrote the post, “always last”, I decided sucking at running just wasn’t okay anymore, so I’ve been hardcore working on my time. Chip kindly pointed out to me that this was the first race I’ve EVER ran in where I didn’t come in dead last. (Praise emoji hands!!!) Y’all. I shaved twelve minutes off my 5K and paced with Chip for the first two miles. Usually he wishes me luck at the start line, and then when the whistle blows, Daddy Long Legs scoots off, leaving me in the dust. I don’t see that guy again until I’m stumbling across the finish line, and there he is finishing up his mini water bottle and granola bar/banana combo.

Not this past Saturday, though. Mama dominated that turkey trot and I finished in 33 minutes!!! Huzzah!!! I’m naming that one at Thanksgiving Dinner tomorrow afternoon, you better believe!

Speaking of, tomorrow is Thanksgiving and I was explaining to Frank that the day after Thanksgiving we start decorating for Christmas and Santa will be sending the elves out. Bad idea. Frank latched onto that one.

CARL. The elf on the shelf. 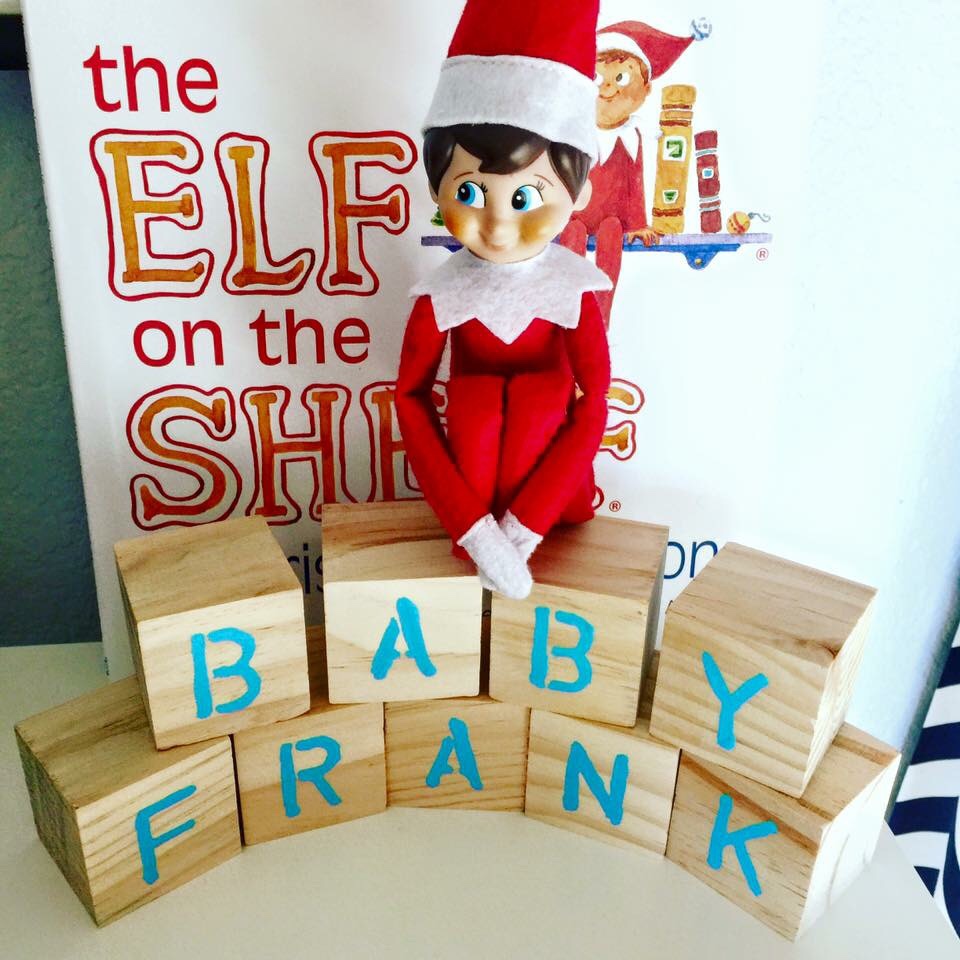 Does anyone else forget to move him each night?! I think I remembered to move him 3 times last year. Poor Frank would wake up and search the house each morning only to find him in the exact same spot. All the while I’m in a corner cursing to myself and muttering under my breath, “the stupid elf!” The real question is HOW can someone forget every single night to move the blasted thing?! Yet here we are.

Also? I have NO idea where Carl is. I stuck him in a bag last year on Christmas morning to get him out of sight since he was supposed to “fly home to Santa” on Christmas Eve, and now I have no idea where the darn bag went. I may be making a Target run on Friday to get a new Carl.

In all seriousness, though. Tomorrow is Thanksgiving and thus begins the “holiday season” (sing that phrase with me, please) and everyone always talks about how busy and chaotic and stressful it all is. Trust me, I’ve made the same lamentations many a time. But isn’t life in general a big old chaotic mess? Maybe you don’t have a baby and a toddler running around, but you’ve got your own crazy. Don’t act like you don’t.

I’m going to force myself to make time this season to just take some deep breaths, some steps back, and some time to just simply relax, and enjoy the smell of a fresh Douglas Fir in my living room.

Every year (beginning on Black Friday and usually ending about New Years’) I re-read the Harry Potter series. Because, why wouldn’t you?! I thought about skipping the tradition this year, however because of ALL the things. But I’m not going to. I’m going to make some margin in my schedule to make the reading happen. Because that brings me joy and comfort. Harry, Ron and Hermione are my good friends and I look forward with complete anticipation to hanging out with them every December.

What are your traditions that you love? Holiday baking? Black Friday shopping (God help you)? Hallmark movie binge? Whatever it is, make some time for it. I know I will.

So, from my big old hot mess of a self to you, have a Happy Thanksgiving, a safe Black Friday and a fun time decorating for Christmas this weekend. Cheers!

Hey there! Thanks SO much for dropping by! Feel free to stay awhile… 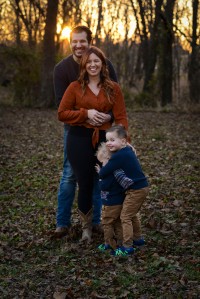